We may be a bit biased, but when it comes to things to do in London at Christmas, we’re rather spoilt for choice here in Piccadilly. From the abundance of shops to explore on Bond Street and beyond, to the world-renowned art galleries and museums, endless pockets of green parks and hidden squares, and, of course, some rather good places to eat, there’s certainly something for everyone. Here are just a handful, five to be exact, of things that will either appeal to your cultural side or simply get you in the festive spirit this December…

The Royal Academy: Klimt / Schiele
5-minute walk from The Wolseley

For 250 years, the Royal Academy has existed to champion art, artists and their practices. Today, it enjoys a reputation for being one of the leading art institutions in the world. Since 1768 it has provided the opportunity to admire works of art and architecture in free displays, yet it is also renowned for putting on world-class exhibitions of art that see hundreds of thousands of people flock to their Piccadilly galleries each year.

One such exhibition is Klimt / Schiele – running from now until 3rd February 2019. Dubbed a ‘once-in-a-lifetime’ show and in collaboration with the Albertina Museum in Vienna, rare drawings from both artists offer intimate insights into their artistic relationship and creative processes.

Buckingham Palace is recognised around the world as the focus of national and royal celebrations, as well as serving as the official London residence of the UK sovereign since 1837.

Despite the palace being used for many events and receptions held by The Queen throughout the year, the magnificent State Rooms are only open to visitors for 10 weeks each summer and on selected dates during winter and spring. This year, they will be open from 21st December until 1st February 2019, so at a time when the palace is not usually open to the public, enjoy a tour with an expert guide through these inspiring rooms steeped in centuries of history.

This year will see the return of the UK’s largest outdoor ice rink, the iconic Giant Observation Wheel and shows from Zippos Circus in the Big Top. New for 2018 is an immersive cinematic experience, brought to us by Backyard Cinema, in celebration of The Snowman, along with ice sculpting workshops and more. Free entry to all, Winter Wonderland is open daily from 10am – 10pm, from now until 6th February (bar Christmas Day).

From now until 13th January, Somerset House’s 18th century courtyard provides a picture-perfect backdrop to one of London’s most talked about ice skating rinks.

Open day and night, TimeOut describe it as ‘the very definition of festive fun’. And for those who feel a little more comfortable off the ice than on, there are many tempting extras, too… sip on mulled wine and enjoy mince pies from the Fortnum’s Lodge and after the sun sets, listen to the ‘Skate Lates’ series featuring DJs performing live on the ice.

On 23rd and 24th December, sing along to Christmas carols in the spectacular surroundings of the Royal Albert Hall.

Compère Greg Beardsell will lead guests through mass sing-alongs to nostalgic carols, whilst James Bond film composer, David Arnold, will treat everyone to an anticipated new version of Silent Night. 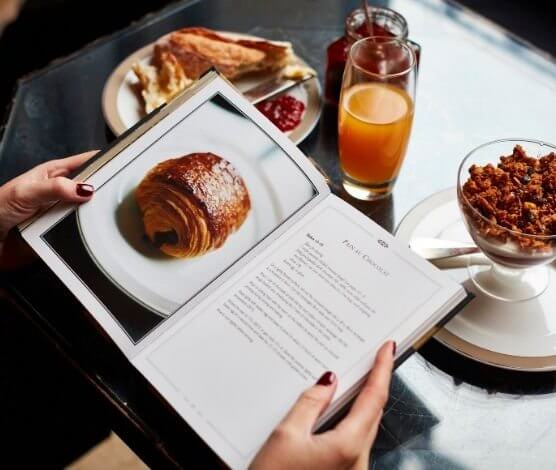 'Breakfast at The Wolseley' Book by A.A. Gill