Breakfast at The Wolseley

Explore some of our best-loved dishes and recipes, and find out more about these time-honoured breakfast traditions.

“Breakfast is a meal apart” – AA Gill, Breakfast at The Wolseley

A true marker of British culinary heritage, breakfast is perhaps what we are best known for at The Wolseley. Here we delve a little deeper into the history of the breakfast traditions we still enjoy today and explore some of our most popular recipes from the menu.

Breakfast through the ages

Etymologically speaking, the word breakfast is quite literal – taken from Middle English “brekfast”, meaning to break one’s fast from the night before. And while the breakfast dishes we enjoy today may look quite different from those taken in the Middle Ages, there are some surprising traditions that have stood the test of time.

Once the preserve of the landed gentry, it took until the Industrial Revolution onwards for breakfast as we know it to become available to the masses. The long hours of hard labour meant a fulfilling meal was needed before going out to work, bringing the breaking of the fast earlier in the day than in previous centuries. By Victorian and Edwardian times, breakfast became more of a ritual with certain traditions and dishes (think Marmalade and toast, Kedgeree, crumpets and scrambled eggs) becoming more commonplace – and breakfasts were served up and down the country in hotels, bed and breakfasts and at business meetings.

Fast forward to the 20th century and cafes – or greasy spoons – all over the country could be found, serving traditional English breakfasts, with two of the most famous in London being E Pelicci in Hackney and the Regency Cafe near Westminster. But, although popular in the US, in the UK the concept of breakfast as a leisurely meal was still largely the preserve of hotels, that was until The Wolseley opened in 2003, helping to start the trend for brunch in London and beyond. 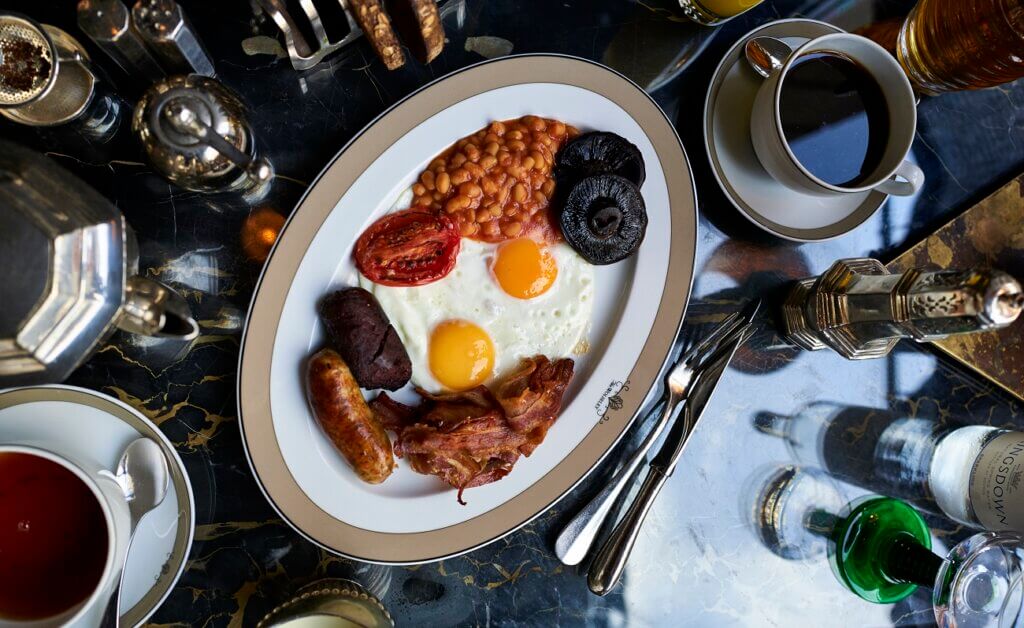 One of our most popular orders here at The Wolseley, the origins of the Full English can be traced back hundreds of years. And right up until the 1950s, almost half of the population enjoyed a ‘fry up’ (as it’s affectionately known by many) for breakfast most days. Traditionally combining bacon, sausages and black pudding, with fried eggs, many regional variations and differences exist – from laverbread in Wales to Haggis in Scotland and pototo farls in an Ulster Fry. We source the meat for our breakfasts from HG Walter, one of the finest butchers in London.

As the British Empire expanded, so too did the tastes and dining habits of those who reaped the benefits across the UK.

During this time, breakfast as a daily meal at the start of the day became more and more commonplace. And kedgeree is perhaps one of the most well-known – and still best loved – dishes to come from the period known as the British Raj. According to Larousse Gastronomique it is most likely derived from a pre-existing Indian recipe known as khichiri – commonly thought to cure all ills – with smoked haddock and eggs being added to suit British soldiers’ palates. Whatever the true origin story, this is another of our most popular breakfast orders and is available on both our breakfast and all day menus.

A question which has become increasingly commonplace in recent years, thanks to the influence of the New York City brunch scene. First said to be referenced by American Guy Beringer in his 1895 letter Brunch: A Plea, where he notes that “The arguments in favour of brunch are incontestable” – something which we would have to concur with here at The Wolseley.

Some accounts say that the tradition predates even this, coming from an earlier British practice of taking a buffet-style breakfast during Edwardian times. Regardless, there is no doubting the preeminent brunch dishes on today’s brunch menus – including our own – such as Eggs Benedict, can be traced directly back to the Big Apple. Often accompanied by drinks of the alcoholic variety, the most popular choices here being champagne or our Wolseley Bloody Mary.

Breakfast at The Wolseley

Since first opening our doors in November 2003, The Wolseley has helped put breakfast on the agenda for many – from breakfast meetings to celebrating those all important milestones; and even the occasional Wedding Breakfast in our Private Dining Room.

Served seven days a week throughout the year, many of the dishes you see on the menu today have been there since day one. From Pancakes to our Full English, along with a selection of brunch dishes, available all day until late into the night; think Eggs Arlington, Kedgeree and much more. And as A.A. Gill keenly observed “Breakfast is everything”.

Breakfast at The Wolseley is served seven days a week, from 7am Monday to Friday and from 8am on weekends. Our Private Dining Room is also available for breakfast hire.

For those interested in reading further, the following sources were consulted when putting this piece together:

Breakfast at The Wolseley for Two Gift Voucher